Here are some of the custom maps we’ve used in our campaigns. Feel free to download them to create your own epic stories. You can find the high resolution files in a Google Drive folder Here. 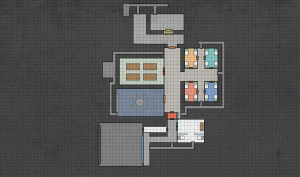 Small space station with an engineering area at the top (gray), a cafeteria (green) with large tables, a command center (gray blue), multiple living quarters (orange, teal, pink and blue), a security checkpoint (red), a medbay (white), and a docking bay (dark gray) at the bottom. There are also two maps one with vents and one without (on the google drive link). 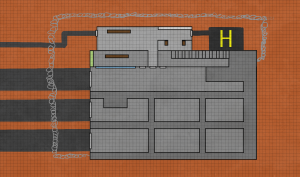 A simple warehouse on mars surrounded in barbed wire (it looks great I know, I spent a lot of time on it). Also outside there is driveways to loading docks and a landing pad. Inside there is a reception area, and offices at the top. There is a formins office under that, along with a stairwell in the room next to that. Of course there is also a large warehouse area (light gray) with catwalks (dark gray) above it. 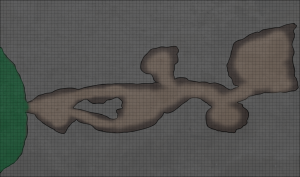 Here is a generic cave with two separate paths in the beginning and three chambers. 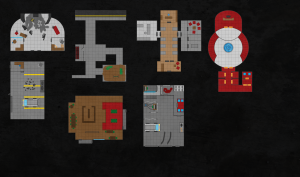 Here is a few separate locations, good for murder mysteries and noir types of campaigns. Going in order from left to right, on the top is a crime scene, an alleyway, a police station, and a mansion. On the bottom is a parking garage, a bar, and a secret hide out. 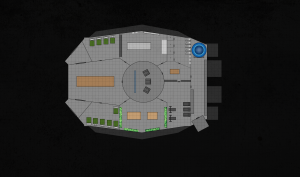 A medium sized spaceship with a central command center, 2 airlocks to the front, a large central dining area, 2 crew quarters, a kitchen at the top, hydroponics to the bottom, a bathroom, gym, and an engineering area with an escape pod at the rear of the ship. 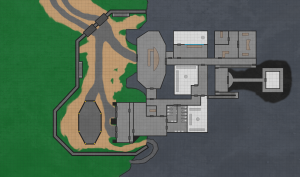 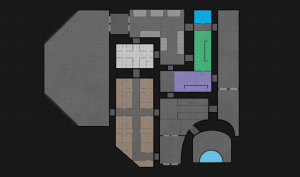 A large space station design with multiple districts. Used for the original design of Eon Station in the Breaking and Entering Campaign. 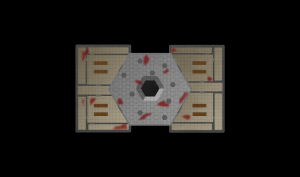 A small prison area for pitting prisoner against prisoner in a death match. Useful mainly for quick combat scenarios.